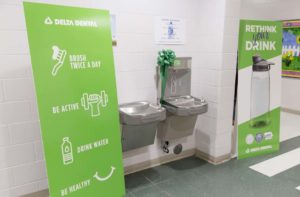 The Delta Dental Foundation of Iowa is again offering grants to schools to replace drinking fountains with stations that have touchless water bottle fillers.

Foundation executive director, Suzanne Heckenlaible says there’s a continued need for the modern stations as schools adapt to the pandemic. “Working with the schools, what we’ve found is they’ve shut down the water fountains –but left the water bottle stations open. So the opportunity for us to provide this assistance is even more important,” Heckenlaible says.

They have been working with schools for several years and had restricted the grants to schools that did not have the new water bottle station. She says they are now opening it up to schools that already have one. Heckenlaible says the average cost is $2,500 to $3,500 to replace an existing fountain with a new one. But she says it can cost significantly more to retrofit older buildings, and they have committed to work with those schools.

The program is called “Rethink Your Drink,” and Heckenlaible says the goal is to get kids to drink water over other less healthy options. She says having water becomes an activity and a habit — where kids have the water daily. Heckenlaible says they hope once the water-drinking habit is established it will stay with the students all their lives.

The foundation is taking grant applications through February 5th. Schools can apply by visiting: deltadentalia.com/foundation/grants.

(Photo courtesy of the Delta Dental of Iowa Foundation)