You are here: Home / News / First report of Covid ‘associated’ with Iowa House 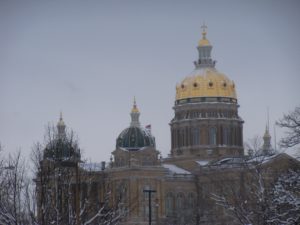 Members of the state legislature were notified Friday night that someone “associated” with the Iowa House had tested positive for Covid.

Democrats have argued the 2021 legislative session, which began last Monday, will become a super spreader event if Republicans in the majority don’t take more steps to stop the spread of the virus. GOP leaders say under state constitution, they do not have the authority to require that elected officials wear a mask.

The Iowa legislature is not meeting today, in observance of the Martin Luther King, Jr. holiday. The Republican-led Missouri House of Representatives is not meeting at all this week after a Covid outbreak among lawmakers. The Missouri legislature also began its session a week ago.