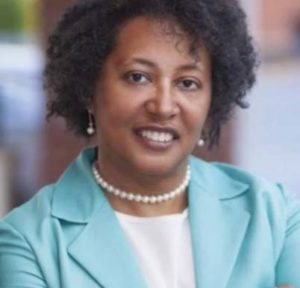 “Wherever you are, I hope that you can use your experiences in this strange time to find love in yourself and for others. If enough of us do this, we can build true justice on a grander scale,” said Kim Cheeks, manager of the Office on the Status of African Americans, which is in the Iowa Department of Human Rights.

Cheeks said after the “grief, adversity and loss” of the past week and the past year, it may be hard to envision that good will come.

“If history and 2020 have taught us anything, it is that we are more resilient than we think,” Cheeks said. “After all the country that Martin Luther King was born to and the country that Dr. King left behind are radically different places because of his mindset and action.”

Cheeks spoke of what she described as King’s “audacious faith” in the future.

“Dr. King saw a world where people overcame the separations of color and culture,” Cheeks said.

Iowa students who won this year’s “Call 2 Serve” writing contest were recognized. A winning poem written by Saanvi Ram, an eighth grader from Dubuque, was read aloud by the event’s host and concluded with this stanza: “Through your words, you have the power to fight, fight for justice.”

Tiara Mosley, an AmeriCorps member who’s working in the Iowa Department of Human Rights, noted the tradition of bell ringing during Martin Luther King Jr. Day events started in 1986, with the Liberty Bell in Philadelphia.

“A particularly fitting symbol for honoring the work of Dr. King, the Liberty Bell was first introduced to a national audience as a symbol for the abolitionist movement,” she said. “The first reference historians can find to the name ‘Liberty Bell’ is in on the cover of an 1835 edition of ‘Liberty’ published by the New York Anti-slavery Society.”