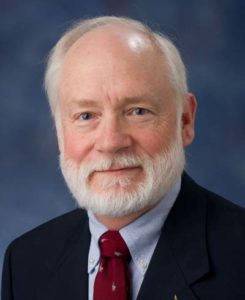 You may’ve heard that radio signals were being detected last week coming from one of Jupiter’s moons. The device onboard the Juno spacecraft that made the discovery was designed and built at the University of Iowa.

Research scientist Bill Kurth, in the U-I’s Department of Physics and Astronomy, says he’s thrilled that NASA has decided to extend Juno’s mission at Jupiter by more than four years.

“The team put together a proposal to NASA explaining what has been accomplished and what will be accomplished,” Kurth says, “and NASA thought that they liked what they saw and decided it was a good idea to continue the mission.” Juno was launched in 2011 and took five years to reach our solar system’s largest planet. Its mission was originally scheduled to conclude in July of this year, but is extended now through September of 2025.

Kurth says the spacecraft will be almost out of fuel by then, plus, Juno may not survive much longer. “The radiation belts at Jupiter are much more intense than those at Earth,” Kurth says, “but we’re ecstatic about how well the spacecraft is managing the radiation so far and think it’s entirely possible we’ll get all the way to September of 2025.”

Kurth is the lead investigator for the U-I-built Waves instrument, which zeroes in on Jupiter’s radio and plasma waves, as well as abundant lightning storms. “These are very important. They’re telling us about convective storms in the atmosphere and that suggests that there are water clouds,” Kurth says. “We’re trying to understand the nature of Jupiter’s atmosphere, how much water there is in the atmosphere and the fact that there’s lightning there is useful for those studies.”

Now, about those signals emanating from Ganymede, one of Jupiter’s moons. It was widely reported last week that FM radio signals were coming from the moon. “The ‘FM’ part of that headline was added by an editor somewhere along the way and it’s a misnomer. They are not frequency modulated signals,” Kurth says. “They’re down in the range of 6 or 7 megahertz, which is quite a bit below the FM band. It’s probably closer to being a shortwave radio frequency.”

The radio signal is not a sign of life on the moon. It’s a naturally-occurring phenomenon, though it is the first time such a signal has been detected coming from Ganymede. Kurth says some of the radio signals they’re detecting from Jupiter are audible, like those known as lightning whistlers.

Jupiter is “an extraordinary place,” Kurth says, and Waves is also studying things like the intense auroras near the planet’s North Pole as well as Jupiter’s system of rings, similar to Saturn’s only fainter.