You are here: Home / News / Feenstra only member of Iowa delegation not at Biden’s inauguration 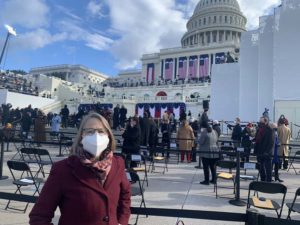 All but one member of Iowa’s congressional delegation are attending today’s inauguration.

Congressman Randy Feenstra, a Republican from Hull, is still in Iowa and, according to a spokesman, Feenstra will attend “senior night” for his daughter’s basketball team at Dordt University. Feenstra will return to D.C. tomorrow, when the House convenes.

Congresswoman Cindy Axne, a Democrat, endorsed Biden just before the Iowa Caucuses. Axne said at the time that Biden was the one candidate who had “the experience and the heart” to bring the country together.

This morning, Axne tweeted that the inauguration is the start of working “to unify, heal and build our country back better than ever before.”

Congresswoman Ashley Hinson of Marion, a Republican, posted a statement on Facebook this morning. Hinson said she’s among 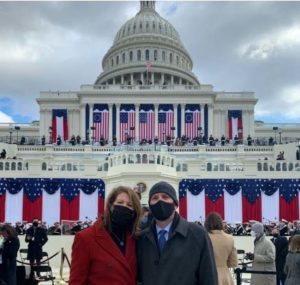 Congresswoman Cindy Axne at Inauguration with her husband John.

the thousands of Iowans who voted for Trump, but “in a democracy, you don’t always get the result you want” and it’s time to move on.

Republican Congresswoman Mariannette Miller-Meeks of Ottumwa, issued a statement this morning, tweeting what she described as her “sincere willingness” to work together with Biden on Covid relief, infrastructure and rebuilding the economy.

Also this morning, Miller-Meeks and Hinson signed onto a letter with a group of other Republicans in the U.S. House. After impeachment and the attack on the Capitol, the group said: “The partisan divide between Democrats and Republicans does not serve a single American.”

Senators Chuck Grassley and Joni Ernst attended the inauguration. Grassley tweeted a photo from his vantage point after the ceremony and said: “Today I attended the 59th Inaugural Ceremonies for President Biden and Vice President Harris. I look fwd to working w them on behalf of the ppl of Iowa.”

Ernst tweeted a statement early this afternoon, calling the inaugration a “sacred tradition.”

“As an eternal optimist, I am hopeful we can work together with President Joe Biden, and the first female Vice President, Kamala Harris, is a bipartisan way to deliver for the American people.,” Ernst said.