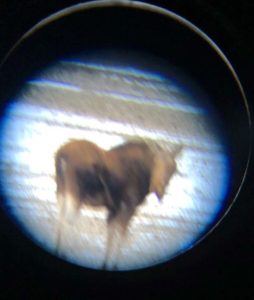 A moose has been spotted in Plymouth County.

The moose is a female and is thought to have traveled to northwest Iowa from northern North Dakota. Iowa DNR Wildlife Biologist Doug Chafa says it is a rare sight here.
He says the last moose sighting was back in the fall and winter of 2015, so it is unusual. Chafa says there are usually two reasons for a moose to travel this far south.

He says a young bull moose may leave the herd because it couldn’t compete for position with other older bull moose. Or he says the female moose in northwest Iowa could be sick.

“Sometimes moose will have this roundworm parasite called a meningeal brain worm. It damages their brain and they will have some weird behaviors like just taking off and walking south,” according to Chafa.

Chafa says he understands the curiosity factor from people wanting to see the moose, but he warns people to keep their distance. “Moose are large dangerous animals to get in close proximity to. It would not be a good idea to try and interact with this moose in any way,” Chafa says. “When an animal starts these long-distance dispersals — if you intercede in that or interfere in that — there is a long history where that just goes, really, really poorly.”

The Iowa DNR Wildlife Biologist says there is no way in determining whether the moose will continue heading south, or if it has found its new home. Chafa says several years ago, a wandering moose found its way south to Interstate 80 near Walnut, Iowa.

Chafa doesn’t believe the moose will do much property damage, but he says that onlookers hoping to see the moose should respect a landowner’s private property rights and not trespass.
(By Dennis Morrice, KLEM, Le MarsPhoto courtesy of the Iowa DNR)