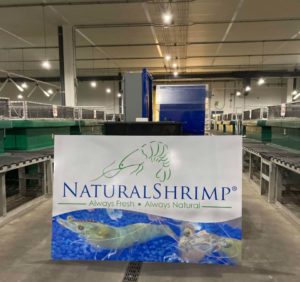 A Texas company is moving its fish farming operation into a facility in Webster City. NaturalShrimp will operate out of the former VeroBlue fish farm that closed a few years ago.

“We think we’ll raise about 9,000 pounds a week once it’s in full production,” Gerald Easterling, president and CEO of NaturalShrimp, said. “We’ll add another $4 million capital investment probably to the facility as we ramp it up and we probably will be up and running in 18 months, full speed.”

Easterling expects to initially hire about 50 people to work at the Webster City plant.

“Then we’re looking at doing further processing,” he said. “What that means is enhanced packaging of the shrimp in portion packs for a more home-delivery type service and…we’ll probably employ about 50-100 people in that area.”

NaturalShrimp bought the former VeroBlue Farms facility for $10 million last month. Easterling said it had a great design, but lacked the right technology.

“We’re lucky to be able to acquire it at a discounted price and come in here with our technology and ramp it up,” he said.

The company operates a similar facility near San Antonio, Texas. NaturalShrimp’s $10 million purchase includes VeroBlue facilities in Buckeye and Blairsburg. VeroBlue Farms filed for bankruptcy in 2018 and the company filed a civil lawsuit accusing five of its executives of mismanagement.