You are here: Home / News / Many roads still covered in snow and ice 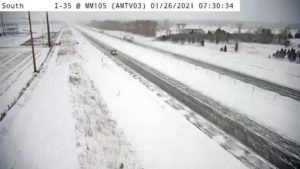 Travel is still not recommended on many roads across the southern two-thirds of Iowa following the latest winter blast.

Some areas of central and southwest Iowa report very heavy snow, according to meteorologist Chad Hahn, at the National Weather Service. “Generally speaking, across the state, ten to 14 inches is going to capture most areas,” Hahn says. “As you go north, less, but certainly from Ames, the Des Moines metro and south, ten to 14 would capture most of those.”

Some flakes are still flying in eastern Iowa but this round of snow is almost over, he says. The trouble is, strong winds are blowing snow and reducing visibility, in addition to causing drifts on roads minutes after plows pass.

“The Department of Transportation and snowplows have been out there doing their best to keep everything open but certainly there are some problematic areas,” Hahn says. “We encourage folks to check with 511ia.org in order to get that information.” We’re in the midst of what Hahn says is an “active” weather pattern, which means some Iowans will have to shovel snow again tomorrow.

“Tonight, we expect another little shot of moisture coming in, nothing at all compared to what we just experienced,” Hahn says. “Some areas, especially across the south part of the state, upwards of an inch of snow late tonight and early on Wednesday.”

After that front passes, it should be clear skies for a few days but Hahn says there’s another chance of winter storms looming this weekend.