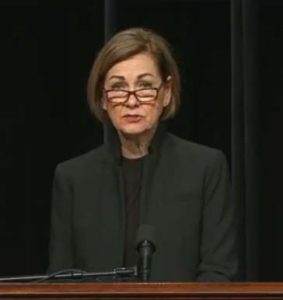 The Associated Press is reporting the state set up a Covid testing site in West Des Moines to screen workers at a company owned by major campaign donors to Governor Kim Reynolds.

Thirty-two employees were tested at the corporate headquarters of Iowa Select Farms, owned by Jeff and Deb Hansen.

A company spokeswoman told the AP employees discovered they may have been exposed to someone with Covid and testing for the staff was set up following a call to the governor’s office.

Earlier today, Governor Reynolds said the state set up rapid testing at more than 60 Iowa companies, including meatpacking and manufacturing plants. Reynolds said any allegation that her administration played favorites is “unjustified.”

“There’s criteria. You qualify. To my knowledge, nobody was told no,” Reynolds said. “If you called and wanted to try to facilitate a way to get your employees tested so that you could ensure them that they were working in a safe environment, that’s what companies were doing and we were doing everything that we could to facilitate that and I will make no apologies for doing that. None.”

State Auditor Rob Sand has announced he will investigate whether other another donor to the governor secured state testing resources for a company in Waverly, while the state denied the local health department’s request for rapid testing elsewhere in the county. Those allegations were first reported on the Bleeding Heartland blog.