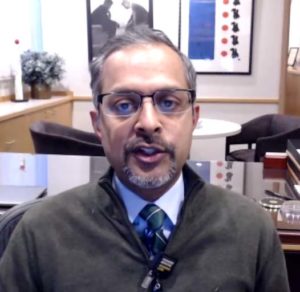 The University of Iowa Hospitals and Clinics plans to start scheduling patients to get the COVID-19 vaccinations next week.

CEO Suresh Gunasekaran says there is still a limited supply of vaccines as they enter the next phase. “So, U-I Healthcare is really quite concerned that many eligible patients — patients who quality for Phase one B — are going to be disappointed or even despondent when they find out over the next couple of weeks that getting a vaccine — even though they are eligible — is not very easy,” Gunasekaran says.

He says they are prioritizing the public doses for those 75 and over. “We’re not seeing mortality shoot up amongst 40 year-olds or 50 year-olds. What we are really seeing is still a pretty big correlation with age,” he says. “And so I am hoping with the vaccination program and phase one A and phase B having a substantial focus on seniors in Iowa — that this will really help us stem the tide.”

The U-I has already vaccinated some four-thousand health care workings in the first phase. Gunasekaran says they looked at drive-through and walk-in methods for delivering the vaccine with speed as a goal.

“One of the key things that we really wanted to emphasize is that we think it is really important to come up with these high throughput vaccination models — so that as quickly as the doses are delivered into a county — that quickly we can get them into the arms of citizens in the county. So, that is one of the key areas that we have practiced multiple different times,” according to Gunasekaran.

He says the infection rates among employees had already been dropping, and the vaccinations have helped. “The vaccine has further driven down our infection rate among health care workers, which has been so needed, as we’ve continued to stay busy, but it is so nice when everybody can come to work,” Gunasekaran says.

He says there haven’t been any major problems for those who have already gotten the vaccine. “For the most part, let’s put it this way. The reactions have been minor.  The vast majority, we are talking 99 percent of the employees came to work the next day,” he says.