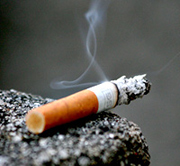 A new report card on tobacco control from the American Lung Association ranks Iowa in five main categories, giving the state an “F” in four of them.

Kristina Hamilton, the agency’s director of advocacy in Iowa, says one of the key items is how much the state spends on tobacco prevention programs. Iowa is investing $4 million a year on efforts like Quit Line Iowa.

“This is crucial funding to really help chip away at the adult and youth smoking rate and the e-cigarette usage rate,” Hamilton says. “The CDC recommends the spending be at $30-million so we’re at about 17% of the CDC-recommended level.”

Quit Line Iowa, at 1-800 QUIT NOW, is a phone coaching program that helps smokers set up a Quit Day and a Quit Plan, helps prevent relapse and gives guidance on medication use. Iowa imposes a tax of a $1.36 on every pack of cigarettes sold. The Lung Association is urging Iowa lawmakers to boost that tax by another $1.50 a pack.

If that happened, Hamilton says cigarettes would instantly become too expensive for droves of smokers, young and old. “We estimate that over 2,000 young adults between the ages of 18 and 24 would quit,” Hamilton says, “and 18,000 current adult smokers would quit over the long term, and it would also prevent over 7,000 premature deaths.” While Iowa’s adult smoking rate has been on the decline in recent years, youth smoking rates in the state are bounding.

Hamilton says about 16.4% of Iowa adults now consider themselves smokers, slightly higher than the national average of around 15-percent. “The high school tobacco use rate is 22.7% and that rate is largely driven by e-cigarette use,” Hamilton says. “The e-cigarette usage rate alone is 20.1%.”

Iowa was also given “F” grades for efforts to end the sale of all flavored tobacco products, as well as for coverage and access to services to quit tobacco. The state’s only non-failing grade was an “A” for its smokefree workplace law. Lung cancer is the nation’s leading cause of cancer deaths, and it’s estimated about 24-hundred Iowans will be diagnosed with the disease this year.

See the full State of Tobacco Control Report at: https://www.lung.org/research/sotc