You are here: Home / Weather / Weekend snowstorm headed to Iowa 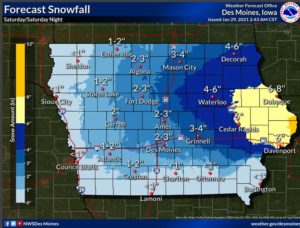 Another weekend, another snowstorm is barreling toward Iowa.

While western and central Iowa were hit with up to 14-inches of snow last weekend, forecasters say this winter blast will drop the deepest snow in eastern Iowa and weekend travel will be impacted.

Meteorologist John Haase, at the National Weather Service in the Quad Cities, says 20 eastern Iowa counties are under a Winter Storm Watch, including the cities of Waterloo, Cedar Rapids, Dubuque, and Davenport.

“It looks like from this storm system, we’re going to be having the highest snowfall across eastern Iowa and on into northern Illinois,” Haase says. “Anywhere from five to nine inches there, and the further west you go, back into central Iowa, a lot less.”

Temperatures are warm enough that the storm system will start out dropping a lot of rain which should eventually change over to sleet, freezing rain, and snow. In the midst, there’s the potential for the formation of ice, which can spell trouble for travelers.

“Right now, it looks like it’ll be just kind of a small glaze of ice. We’re not looking at any kind of an ice storm,” Haase says. “But, anytime you’ve got ice on the roads, certainly, we’ve got to use a lot of extra caution.”

Much like last weekend, this latest storm should arrive on Saturday morning and will likely last into Sunday. “It looks like it’ll be starting across eastern Iowa, especially late in the morning and through the afternoon hours, or it could be mixed with some light freezing rain, sleet, and snow,” Haase says. “Late in the afternoon and especially Saturday night, that’s when the heaviest snow would be occurring.”

This is a very active weather pattern lately, he says, and there’s a chance for another “snow event” Wednesday or Thursday of next week. Keep up with the changing forecast at weather.gov.