You are here: Home / Sports / Drake nationally ranked for the first time since 2008 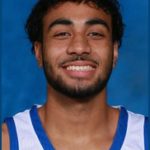 For the first time since 2008 the Drake basketball team is nationally ranked. The Bulldogs are 25th in the Associated Press Poll after Sunday’s 78-76 overtime victory against Illinois State. Drake improved to 16-0 despite making only four of 30 shots from three point range and squandering a 15 point second half lead.

“It’s league play and you have to find a way to win sometimes,” said Drake coach Darian DeVries. “We were able to survive and get the win.”

The Bulldogs and Redbirds conclude their two game series this evening and junior guard Roman Penn says the Bulldogs need a better effort.

“We were not focused and you could tell,” said Bulldog guard Roman Penn. I think we will make adjustments and play a lot better.”

Iowa is ranked eighth in the AP Poll. The Hawkeyes return to action Tuesday nifght by hosting Michigan State.