You are here: Home / Weather / January was slightly warmer than average with lots of snow 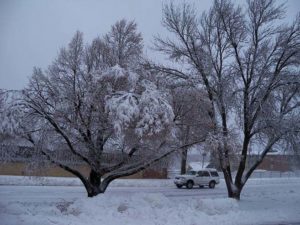 Punxsutawney Phil has predicted six more weeks of winter on this Groundhog Day. That prediction comes on the heels of what was a warmer and snowier January.

State Climatologist Justin Glisan compiles his statewide information from actual numbers — not a groundhog. They showed a warmer January.

“Looks like we are about 24 degrees — and that’s a little over four degrees above average,” Glisan says. There were some 40-degree days in January, and Glisan says it was also a busy month for storms.

“We had multiple systems pulling through the state and lots of snowfall. We’ve had anywhere from a band of 15 to 20 inches across southwest Iowa, all the way up through northeast Iowa,” Glisan says. “Generally around the state, snow totals will be around ten to 12 inches.” Glisan says there are some areas that will have snow totals well above the average.

Glisan says the meteorological outlook for February includes cold temperatures
“We are seeing a pretty high probability of colder than average temperatures,” according to Glisan. “We’ve seen a wobble in that Polar Vortex up over the Artic that dams in all that cold air. So we are going to start see colder air outbreaks across the state beginning towards the end of the week.”

Glisan says the outlooks are pointing to a possibility of February being a snowy month as well.