You are here: Home / News / Weather heading back into the deep freeze 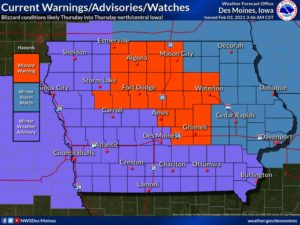 Winter weather advisories are blanketing Iowa for Thursday, including a Blizzard Warning for 25 counties across northern and central Iowa.

“Tomorrow morning, we’re going to see a pretty powerful cold front sweep across the state and behind it, we’ll see rapidly falling temperatures, strong winds — potentially gusting in excess of 45 miles-an-hour, and also some snow,” Martin says. “The combination of all of that looks like it could wreak some havoc on our travel conditions across the area.” 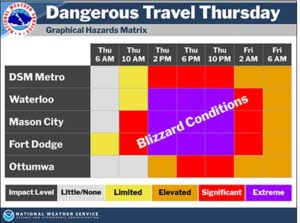 “The amount of snow we receive isn’t going to be the whole story with this system, by any means,” Martin says. “It’s going to be falling temperatures and what it can do to our roads in terms of if roads are wet beforehand and if we get any blowing snow before that sticks to roads and tire tracks and it ices over, like we sometimes see in these types of setups.”

Temperatures peaked in the 30s a few days ago but the next several days could see highs only in the teens and single digits, with below-zero wind chills. Those strong winds could mean drivers will have to deal with greatly reduced visibility and occasional whiteouts.

“It could lead to some pretty icy road conditions and then, with the winds blowing, it could possibly break into the snowpack that we have already in place and blow some of that snow around, and obviously, any snow that falls is going to blow around quite a bit,” Martin says. “We could be looking at quite a messy situation, especially across north-central and into central Iowa.”

The extreme cold is expected to stick around into next week. Over the weekend, high temps may only be in the single digits with sub-zero lows.