You are here: Home / News / I-80 closed near Newton by chain reaction crashes 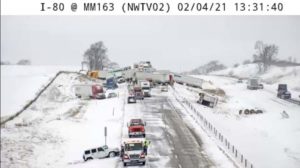 Interstate 80 between Newton and Colfax was closed early this afternoon after a series of chain-reaction crashes involving up to 40 vehicles.

The road was a sheet of ice, according to a spokesman for the Iowa State Patrol. Two state troopers were on the scene, helping some of the first motorists who’d wrecked.

Both patrol cars got crushed along with a few dozen others in a matter of minutes. Patrol Sergeant Alex Dinkla says most of the vehicles involved were commercial trucks, going too fast to be able to stop.

No one was killed, but some drivers were seriously injured. The two troopers on the scene were outside their vehicles and were not hurt.

KWWL reports more than a dozen vehicles crashed on Highway 20 and emergency crews had to call in a hazardous materials team. A tanker truck carrying sulfuric acid was involved in the pile-up near Wellsburg.