You are here: Home / Human Interest / 40+ dogs rescued from Marengo property during blizzard 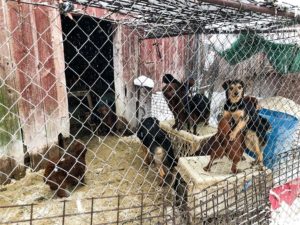 Some of the rescued dogs. (ARL photo)

Four vehicles and a nine-member response team from the Animal Rescue League in Des Moines traveled through Thursday’s blizzard to rescue more than 40 dogs from a property in Marengo.

The Animal Rescue League’s Joe Stafford has led hundreds of animal rescues — and he says the dogs were in some of the worst living conditions he’s seen.

“We had a very seasoned team and I’m grateful for that,” Stafford says. “If the weather had been nice, it would have been trying. The weather made it much more difficult.”

A local agency had been working earlier this week with the owner to remove dogs from the property, but with frigid temperatures in the forecast, Stafford says it was important to get all the dogs rescued as soon as possible. The operation was harrowing for the dogs being rescued from run down sheds and a camper without a floor — and the rescuers had to deal with blowing and drifting snow.

“We’re wanting to get back to the Animal Rescue League of Iowa as quickly as we could, of course, because we have these dogs on board,” Stafford says. “We don’t really know what their medical conditions are or what their immediate needs might need and a normal one-and-a-half hour drive or so turned into a 4+ hour saga.”

The rescue team stopped three times during the day to dig or pull vehicles out of snowbanks.

Stafford says it appears all of the dogs that were rescued were born on the property, although there were no puppies.

“What I will tell you is, oh boy, they’re super, super cute,” Stafford says. “I mean, they really honestly are.”

The dogs are “scared and timid,” according to Stafford, likely because they’ve only been around a couple of caregivers. While their medical needs to being addressed immediately, he says it may take take a few months to ease the dogs’ fears of other humans.