You are here: Home / News / Low water looming as bigger concern than flooding on Missouri River 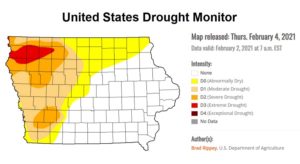 While parts of Iowa are seeing near-record snowfalls this winter, points west are seeing less snow than usual, reinforcing concerns about a worsening drought in the spring.

Hydrologist Kevin Low, with the Missouri Basin River Forecast Center, says instead of a flood threat, low water may be more of an issue along the Missouri River in a few months.

“Snowpack conditions in the mountains can generally be categorized as below normal,” Low says. “By this point in the winter, we have usually accumulated about 60% of the seasonal peak snow-to-water equivalent in the mountains. We’re still fairly early in the season and things could still change.”

Low says the forecast for the region is for a below-normal runoff season, which lasts from April through September. “Soil moisture conditions across the basin continue to be drier than normal,” Low says. “The latest U.S. Drought Monitor does list 91% of the Missouri Basin as being abnormally dry or worse.” The Drought Monitor report for Iowa this week shows much of Iowa’s western third in moderate, severe or extreme drought.

Kevin Grode, a civil engineer for the U.S. Army Corps of Engineers, says snowpack across the Great Plains is also contributing to lower-than-normal runoff expected this spring. “Plains snowpack, which typically melts from mid-February into April is currently very low to nonexistent in the upper basin,” Grode says. That’s despite January runoff above Sioux City at 1.1-million acre feet — or 141% of average. Corps officials attribute the above-average January runoff to above-normal temperatures, melting any accumulated plains snowpack, and inhibiting river ice formation.

Releases at Gavins Point Dam in South Dakota will be maintained at the winter release rate of 17,000 cubic feet per second. Corps officials say the releases will be adjusted, if needed, in response to ice formation on the Missouri River below Gavins Point.