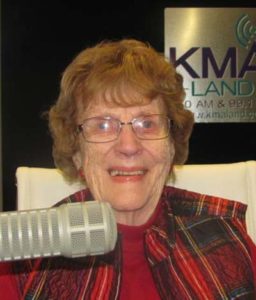 A woman who was considered the last of Iowa’s great radio homemakers has died. Evelyn Birkby died Sunday at the age of 101.

Birkby launched a weekly column entitled “Up a Country Lane” in the Shenandoah Evening Sentinel in 1949. After moving to the Valley News Today, the column continued for 70 years until its final publication in November, 2019.

Birkby was a regular voice on KMA beginning in 1950, and was among the legendary homemakers that graced the airwaves, providing recipes and household hints to generations of listeners. In her later years, Birkby visited the KMA airwaves at least once a month.

Birkby also authored 10 books, and was in great demand as a speaker on many subjects, including life on the farm from a woman’s perspective in the 40s and the 50s. In her later years, Birkby visited the KMA airwaves at least once a month. In addition to giving recipes, she covered a wide range of topics in each interview. During a 2014 appearance, she talked about how she loved the change of seasons.

“I love four seasons and I don’t mind winter,” Birby said. “I hate to say that because people look at me like I’m crazy. Every season has its joys and its fun and its problems.” Evelyn Birkby’s final “Up a Country Lane” column appeared in the Valley News Today in November of 2019.

Birkby’s weekly column got its start in 1949 in the Shenandoah Evening Sentinel with some encouragement from her husband. Birkby grew up in Sidney as the daughter of a Methodist minister. She attended Simpson College and was briefly a school teacher before having children. Over the years, she authored columns in unique settings, including frequently bringing her work on family camping trips that spanned the country.

Birkby adapted to the advent of technology in continuing to write her column. She recalled the first time she used a computer, instead of a typewriter. She joked that she welcomed the advent of computers because they provided her with a spell-checker. Birkby appeared on KMA regularly through the years, sharing stories and recipes. She continued to have a monthly segment until late last year.

Services for Birkby are pending.