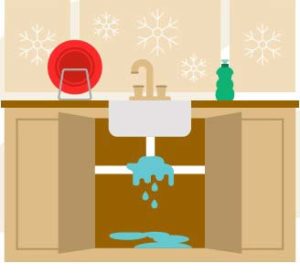 During this bitter cold and snowy winter, the state’s largest home insurer is warning Iowans to pay close attention to their plumbing or they could be facing an expensive disaster.

Andrea Sabus, a State Farm agent based in Grimes, says frozen pipes can become brittle and break easily, causing a destructive flood inside your house. “State Farm, on the average, pays about $9,000 for claims in Iowa for frozen pipes,” Sabus says. “In the state itself, just State Farm paid over $750,000 just in 2019 alone.”

According to the company, Iowa ranks 12th in the nation for frozen pipe claims. She says a one-eighth-inch crack in a pipe can spray more than 250 gallons of water in a day’s time.

“If it’s up on the main floor and under the kitchen sink, you can see the wood floors get very damaged and warped, cabinets get ruined because the water wicks up into them,” Sabus says. “If the water goes through and down into the basement, you’re dealing with ceiling, drywall, carpet — it’s just extensive damage depending on where it happens.”

There are precautions Iowa homeowners can take to avoid a broken pipe.
“Let your hot and cold faucets drip if you’re going to leave overnight,” Sabus says. “Open your cabinet doors, underneath your sink where the pipes are, to allow heat to get into those areas. Also, insulate your exposed water pipes, such as those down in your basement, in crawl spaces or near those outside walls.”

In addition, never turn off your furnace when you leave in an effort to save money on the winter heating bill. Always leave the thermostat set to at least 55-degrees.