You are here: Home / Sports / Iowa’s Wieskamp is B1G Player of the Week 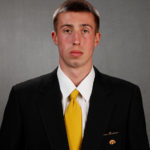 Iowa junior Joe Wieskamp has been named the Big Ten Player of the Week, it was announced Monday by the Big Ten Conference Office.

In Iowa’s 13-point triumph over the Scarlet Knights, Wieskamp posted his third double-double of the season and seventh of his career. He led all scorers with 26 points and controlled 10 defensive rebounds. Wieskamp made 64 percent of his total field goal attempts (9-of-14), including 5-of-7 from 3-point territory.