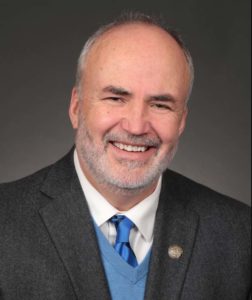 State Senator James Carlin, a Republican from Sioux City, will announce at 8 a.m, this morning that he plans to run for the U.S. Senate seat currently held by Chuck Grassley.

Carlin told the conservative Iowa Standard website he’s very concerned about the direction of the country. Carlin aired similar sentiments during a speech in the Iowa Senate on January 28.

“I think we have cause for concern,” Carlin said. “Are we free today? What have our legislators done on national and state levels?”

Carlin didn’t use the phrase “cancel culture” in that late January speech, but Carlin argued freedom of speech is under attack.

“If you don’t think so, ask President Trump,” Carlin said. “The moment he lost the election, they took away his free speech on every media platform, immediately.”

Carlin, who is 58, has been a trial lawyer in Iowa for 23 years and a member of the state senate since winning a special election in late 2017. Grassley, who is 87, has not announced yet whether he’ll seek an eighth term in the U.S. Senate. A spokesman for Grassley’s campaign said the 2020 campaign just ended, there’s plenty of time for campaigns before 2022 and Grassley “is focused on serving Iowans and holding government accountable, as he’s always done.”