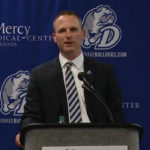 DeVries is one of 15 coaches on the watch list.

In his third year with at the helm of the Bulldogs, DeVries has led the team to a 21-2 record for its third-straight 20-win season, a feat that had only previously been accomplished once in school history. The Bulldogs rolled off a school-record 18-straight wins to open the season and earned a spot in the Associated Press Top-25.

DeVries and the Bulldogs begin the final week of league play starting with the upcoming home series against Evansville before closing the regular season at Bradley.