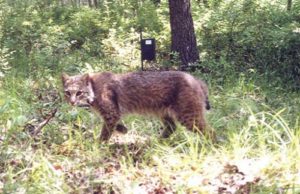 The Iowa Natural Resources Commission has given the go-ahead for an expansion of the bobcat hunting zones in the state.

“Dubuque, Delaware, and Jones Counties. The reason for that is we continue to see nice growth and expansion of the bobcat population in a south to north direction up through areas of suitable habitat in eastern Iowa,” Evelsizer says.

Evelsizer says it’s clear the bobcats are moving beyond the three counties they are adding. “We are already getting reports from our staff and from the public — which we very much appreciate in monitoring their growth and expansion — up into Clayton, Allamakee, and Winneshiek Counties at this time,” according to Evelsizer. “However it doesn’t look like enough yet to warrant a proposal to ask for a harvest up there.”

He says they have taken a slow and steady approach to expanding the bobcat harvest. “Where we let the population grow on purpose up into those areas of good suitable habitat,” Evelsizer explains. “And then a few years later when we see good breeding established within those counties — then it’s a good time, a smart time, and a responsibility to ask for some harvest to be established in those counties in order to kind of keep them in check. Because they don’t have a lot of natural predators.”

This proposed rule allows each fur harvester to take one bobcat in Delaware, Dubuque, and Jones counties. The bobcat population had dwindled due to loss of habitat and they became an endangered species in 1977. A limited hunting season was reinstated in 2007 and then expanded as the population continued to grow.

The DNR will hold a conference call to take comments on the proposal on March 30th from noon to 1 pm. Written comments can also be submitted through March 30th.