You are here: Home / News / Warm up on the way after weekend snow 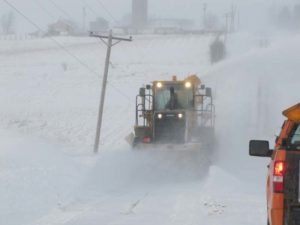 Up to nine inches of snow fell on parts of western Iowa on Sunday, but there will be plenty of melting today as temperatures climb into the upper 30s and lower 40s.

It’s been a month of bitter cold with Sioux City breaking records dating from the 1930s, with two days at 28-degrees below zero. Meteorologist Brooke Hagenhoff, at the National Weather Service, says more extreme cold is unlikely.

Hagenhoff says, “While we can’t rule out another really cold spell, just climatologically, we’re moving into a time of year where that would be a little more difficult to achieve.”

Last week’s negative temperatures came from what’s called a trough, a dip in the jet stream that allowed Arctic air from Canada to move into the central United States and as far south as Texas.

“The cold last week was really an anomaly,” she says, “so what we’re getting back to is actually closer to what is normal for this time of year.” The forecast calls for high temperatures all week to remain above freezing, though tomorrow may be the warmest day of the week.

The Weather Service warns any snow that melts on roads today will likely refreeze quickly tonight once the sun goes down, producing icy spots and potentially hazardous travel.