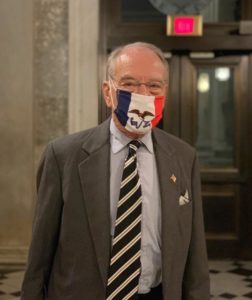 “The massive number of people that have died to this point and it’s going to get more added to it,” Grassley says. “It’s sad when we have this situation.” President Biden and the First Lady held an event outside the White House last night, lit by 500 candles, each representing 1,000 deaths.

The 87-year-old Grassley tested positive for COVID in November, quarantined for two weeks, and continues to wear a mask in public settings. He says tonight’s service will include a bicameral, bipartisan moment of silence.

“I know it’s very difficult for the families that have been affected by it,” Grassley says. “It’s just to honor them but also to bring tribute to not just those who have died but to bring attention to what all of us have a responsibility to do, to make sure that it gets over.”

More Americans have died in the past year from coronavirus than died in World War One, World War Two and the Vietnam War combined. The U.S. has also seen more deaths from the virus than any other country. With vaccine production and distribution ramping up, Grassley says there’s reason for optimism.

“There’s even good news in Iowa in the number of people that are hospitalized,” Grassley says. “Attending will be an extra moment for me to pray for their families and that’s the purpose of the gathering of members of the House and Senate.”

Iowa health officials say the number of people hospitalized statewide for treatment of the virus is 227. That’s down from a peak of 1,500 in mid-November.

Tonight’s event in Washington D.C. is scheduled for 5:15 Central time.