You are here: Home / News / Governor approves 2.4% increase in state per pupil spending on schools 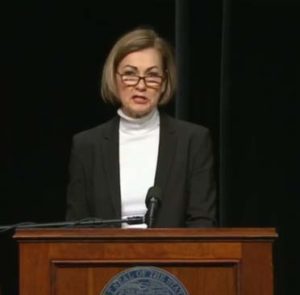 Republican Governor Kim Reynolds has signed two bills into law that outline the GOP’s main school spending plans for the next academic year.

It means Iowa’s pre-K through 12 public schools will get a 2.4% increase in general per pupil spending.

“This is a solid funding bill that sets our schools on a predictable, reliable, fundable path into the future,” Senator Amy Sinclair, a Republican from Allerton, said last week.

Democrats say the state has a significant budget surplus and could afford to spend more on schools. The per pupil spending calculation is based on this fall’s enrollment, which declined during the pandemic. Senator Rob Hogg, a Democrat from Cedar Rapids, said that will shortchange schools.

“This bill will cut $7.4 million from preschool statewide,” Hogg said during debate last week, “and result in the loss of over 2500 slots this fall.”

“We are going backwards and we are hobbling our preschools for years to come with an inadequate funding increase,” she said last week, “imposing a formula for normal times on the most abnormal of situations.”

Sinclair said she and other Republicans are working on a fix for preschools that will be considered later.

The package the governor approved tonight provides an additional $27 million that will be split among districts to deal with pandemic-related costs.

That round of funding for schools is calculated based on how many days a district had students in classrooms during the fall semester. The package also provides more money for transportation expenses, to help geographically large rural districts cover the cost of long bus routes.