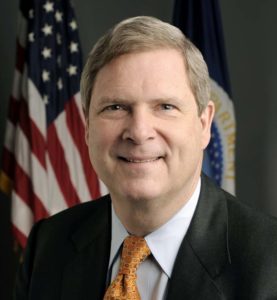 The leader of one of Iowa’s largest commodity groups is reacting favorably to former Iowa Governor Tom Vilsack headed for another term as U.S. Secretary of Agriculture.

The U.S. Senate voted to confirm Vilsack on Tuesday to a post he held during all eight years of the Obama administration. Iowa Soybean Association President Jeff Jorgenson says they can now move forward with an experienced leader at the U.S.D.A.

“It was just a matter of time before it got stamped and approved and handled,” Jorgenson says. “He obviously went through the confirmation hearing with not many issues by any sort. It’s good for agriculture. It’s a friendly face.”

Jorgenson says he’s hoping Vilsack can focus on working with other countries to promote Iowa’s and America’s commodities. “We really need to work on our trade,” Jorgenson says. “If there’s barriers, working on those barriers and making sure the world knows that we are ready for business and we’ve got ag goods that we need to move.”

Iowa is the nation’s number-one producer of corn-based ethanol and soybean-based biodiesel and Jorgenson says Vilsack understands the value of biofuels.
“He’s going to play a big role in it,” Jorgenson says. “Honestly, the thing we see and that we’ve seen in the past as soybean producers, he was a voice in the room that calmed the situation and we’d actually made some good progress. That’s where we’re headed, that’s what we need.”

Jorgenson says it’s also important to have Vilsack heading the U.S.D.A. as the writing of the new Farm Bill appears on the horizon.