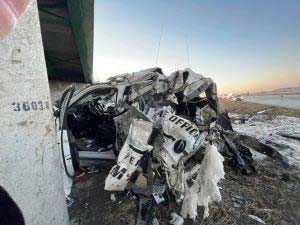 The wrecked DOT vehicle after being hit by a semi.

An Iowa DOT motor vehicle enforcement officer is lucky to be alive after a crash in southwest Iowa on Wednesday afternoon.

According to the Iowa State Patrol, 56-year-old Theresa Ann Fox, of Ankeny, was driving a 2015 Chevy Tahoe southbound in the right-hand lane of Interstate 29 next the Exit 1 overpass.

The vehicle was moving slowly and providing traffic control for a DOT Highway repair crew conducting pavement patching. The Tahoe had its rear emergency lights activated and arrow stick directing traffics to merge left, when at around 2:45 p.m., the SUV was struck by a southbound Volvo semi.

The impact caused the SUV to leave the road to the right and roll over, before coming to rest on its wheels.

Photos show the vehicle is barely recognizable due to the amount of damage. Officer Fox was transported by Hamburg Rescue to Grape Memorial Hospital, where she was treated and released. She said on social media, “I’m alright. Seat belts save lives.”

The driver of the semi, a man from Hollywood, Florida was not injured. The Fremont County Sheriff’s Office posted a note on social media asking motorists to “Please move over and slow down for stopped vehicles on the roadway.”