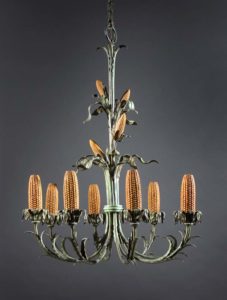 A massive new exhibit at the Cedar Rapids Museum of Art is focused on Iowa’s most famous artist, Grant Wood, but it highlights a host of works other than his easily recognizable paintings.

Museum curator Kate Kunau says when Wood was a younger man, the creator of the world-renowned American Gothic was a commission-based artist.

“He took any job that was offered to him,” Kunau says. “He did a lot of interior design. There’s a beautiful fireplace hand iron, a fireplace screen, some garden gates, he did a necklace. When he was in Chicago in 1916, he did silverwork, his way of putting food on the table for a long time.”

When he was in his mid-20s, Wood was hired by a Cedar Rapids hotel to create several related works, including a large copper and iron chandelier focused on Iowa’s primary export — corn.

“The chandelier was designed along with a series of murals for the dining room, known as the Iowa Corn Room, in the Hotel Montrose in 1925 and 1926,” Kunau says. “The body of the chandelier is the green stalk of the corn plant and each of the sconces that hold light bulbs are ears of corn.” The chandelier is part of the exhibit and it’s still “spectacular,” she says, painted in green and yellow.

Wood’s paintings are recognized globally, but what we know today as his signature style started to evolve in 1928. The sweeping landscapes and other works, like American Gothic from 1930, are the style he painted in for the rest of his life.

“Up until 1928, he’s largely an American Impressionist,” she says, “and so much looser, brushier work, the paint application is much thicker, much more similar to the French style that we think about in the late 19th century than it would be to his mature work.”

Some of those earlier Wood works on display would hardly be recognized as his, even by devoted fans. The museum is dedicating five galleries to the “Grant Wood Revealed” exhibit, which includes 130 pieces.

“He was a very creative person and until he really had his career-making moment in 1930, he was exploring a really wide variety of media, different styles,” Kunau says. “I think taking away that his creativity was much wider than we usually give it credit for is a wonderful bullet point from the exhibition.”

While Wood is best known for his paintings created between 1930 and his death in 1942, those represent only a fraction of his artistic output, which began well before 1910.

This is the largest exhibition of Wood’s work in more than 15 years. Kunau says it’s a remarkable opportunity to see a different side of an artist everyone thinks they already know.