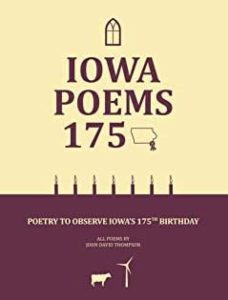 A new book of 175 poems about Iowa — and Iowans — commemorates what will be the 175th anniversary of Iowa’s statehood later this year.

Poet John David Thompson of Pella has published 15 books and “Iowa Poems 175” is his third book of poems dedicated only to Iowa topics.

“It’s all Iowa people, places and things, state symbols, events, of course some historic events and circumstances as well that pertain to Iowa,” he says. The 57-year-old University of Iowa graduate teaches both at the high school and at Indian Hills Community College and was chosen by a panel to create this book celebrating the Iowa’s December birthday.

He assures, “Iowa Poems 175″ contains 175 poems. “They are all about people and places and things in Iowa,” Thompson says. “Some of them are grouped or clustered. It features the ten Iowa inventions that changed the world, according to the Iowan magazine back in the spring of 2016. I wrote a poem for all ten of those inventions.”

Having one-and-three-quarter centuries of history presented a plethora of potential writing topics, though Thompson says some of the poems date back many millennia.

“They cover the 175-year gamut,” Thompson says. “The oldest one is entitled “Crinoid Sea Lily’ and it’s about our state being underwater. There’s one that is about Little Switzerland and how that area formed, but most of them are from 1846 to the present day.”

The very first poem in the collection is about the recent phenomenon of Hawkeye fans waving to young patients at the nearby medical center during football games. It’s called, “The Wave, Stead Family Children’s Hospital, Iowa City.”

The 244-page book is available now on Amazon and will be coming soon to independent bookstores across the state.