You are here: Home / News / Kayakers beware: The air is warmer but that water is still near freezing 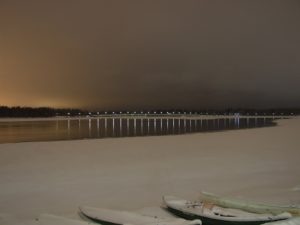 While some Iowans avoid winter weather at all costs, many others enjoy the outdoors at this time of year through paddling, which can provide exercise, solitude and a chance to see the amazing beauty of nature.

While there will be plenty of melting with this week’s above-normal temperatures, many of the state’s lakes, rivers and streams are still iced over, but Susan Stocker at the Iowa DNR says kayakers are discovering plenty of open water.

“There actually is and on portions of the Des Moines River, there is open water and even on the sloughs of the Mississippi, just not far from the channel,” Stocker says. “Yeah, avid paddlers are finding open water.”

Forecasters are calling for highs in the 40s for the rest of the week across northern Iowa, with 50s in central and southern Iowa. Even when air temperatures are above average, the water is still dangerously cold, so she says paddlers should dress for the water temperature, not the air — and expect to go into the water.

The piece of outerwear known as a “float coat” may be a good option, she says, as it’s essentially a life jacket that looks like a typical winter coat.

Stocker says, “Though float coats may not be the perfect gear for them, make sure that they have a life jacket and/or a dry suit which can serve as floatation.”

Spring won’t arrive until March 20th, and while you may spot a few canoes during the Iowa winter, Stocker says they’re more of a rarity now.

“It’s kayakers this time of year, single or double kayaks, and then they add skirts to keep the water out and keep them a little drier,” Stocker says. “It’s a few more pieces of equipment to adapt to the cooler temperatures.”

Especially during the winter, don’t paddle alone, she says, use the buddy system. Also, bring a change of clothes in a dry bag, a first aid kit and a protected cell phone, and Stocker adds, let a friend or loved one know where you are going and when you are expected to return. Find the DNR’s interactive paddling map HERE.