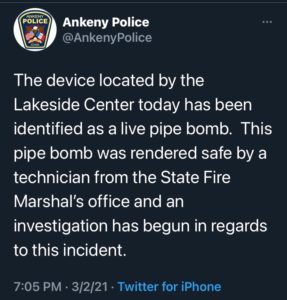 A polling place in Ankeny was evacuated for about three hours today after a live pipe bomb was found in the parking lot.

According to photographer for The Des Moines Register who was reporting from the scene, a crew clad in bomb suits surrounded the device and safely detonated it. Voting resumed this afternoon at the precinct where ballots were being cast in a special election in the Ankeny School District.

Ankeny Police say no other pipe bombs were found in the area. They’re asking anyone with information about the incident to call the Ankeny Police Department.