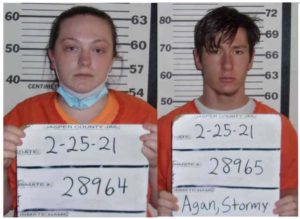 A 21-year-old Newton couple face charges after their three-month-old child was found with broken bones.

Newton Police Chief Rob Burdess says Stormy and Jessica Agan both face two counts of child endangerment and one count of child neglect. They are currently free on bond.

A police investigation determined they were responsible for the care of their child when the injuries occurred.

Newton officers were called to MercyOne Newton Medical Center November 24th, when the Agans had brought the child in with a broken arm.

Hospital staff also discovered the infant had a broken rib. The injuries seemed inconsistent with an accident.

According to Chief Burdess, officers received conflicting stories as to how the infant was injured.

With the help of the Department of Human Services, additional medical information was obtained. It involved an additional broken bone in the child’s leg.

Doctors described that injury as a highly specific fracture from non-accidental trauma.