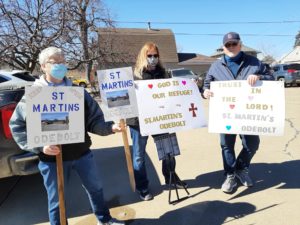 More than a hundred protestors of all ages came to Sioux City on Tuesday to speak out against a plan in the Sioux City Catholic Diocese to combine smaller parish churches.

Two busloads of people and several more in cars came from places like Carroll, Odebolt, Arthur and Kiron.

Roger Dentlinger, from Holy Name parish in Marcus, fears the policy change will harm communities whose residents would have to travel if their town loses its church.

“Certainly for the older population, especially in inclement weather, they’d be forced to travel to neighboring towns,” Dentlinger says. “In some situations, that may be a matter of seven or eight miles and in other places, it may certainly be a matter of 20 or 30 miles.”

Diocese officials say there aren’t enough priests to go around so smaller churches would be consolidated by 2025. Dentlinger says there are other options.

“The Catholic mass that we attend each weekend, we’d like them to consider possibly even having a rotating schedule,” Dentlinger says. “If you can’t have a mass every weekend in our church, we would be very happy to have mass every other weekend or once a month if need be.”

Deacon Mark Prosser, director of pastoral care for the Sioux City Diocese, says a priest shortage isn’t the only issue they are facing.

“There’s a multifaceted impact on our diocese with less people in many of our rural communities translating to less people in the pews,” Prosser says. “There are less people practicing their faith, especially in the mainstream churches including Catholicism. And then a reduction in the sacraments, be it baptisms, marriages, confirmations, and so on.”

Prosser says lessening the frequency of services or a rotating schedule isn’t the solution.

“As an example, you have three churches in a grouping and A has mass this week, and then B next week, and C and so on,” Prosser says. “What occurs for the most part is, those living in town A go that week, but they don’t go week B and they don’t go week C. It’s whenever it’s close.”

Prosser says 50% of the 48 priests currently serving will reach retirement age in the coming decade, while there are only eight men currently in the seminary to fill those vacancies.

Bishop R. Walker Nickless came out to speak briefly to those protesting. He blessed the gathering and said he hears them, and that the diocese was doing the best it could with the priests it has.