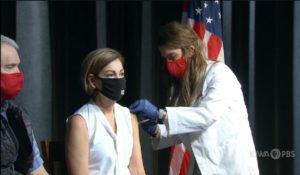 After blasting those who are spreading what she called “misleading” and “inaccurate” information about the Johnson and Johnson vaccine for COVID-19, Governor Kim Reynolds took the shot herself on live TV this morning.

“I wouldn’t ask Iowans to do anything that I’m not willing to do,” Reynolds said.

“Is she done?” Reynolds asked, seconds after getting the shot. “Wow, o.k.”

Earlier, Reynolds said there’s been unwarranted criticism of the Johnson and Johnson vaccine, the third to be approved for use nationwide.

“This information is misleading,” Reynolds said, “and, quite frankly, it’s irresponsible to position any vaccine as a less desirable option when it’s undergone the same rigorous clinical trials to test its safety and efficacy.”

“The 25,600 doses allocated to Iowa are arriving now and tomorrow and we’ll begin vaccinating the next tier of Iowans,” Reynolds said, “which includes some workforce populations who’ve been essential to keeping the critical supply chains moving the last year.”

Tyson is setting up mass vaccination sites at its meatpacking plants in Iowa this week. Reynolds said within five weeks, the goal is to have employees at 456 food processing and manufacturing plants in Iowa vaccinated. All Iowans who live and work in congregate settings — like assisted living facilities — should be vaccinated by the first week of April as well.

“Of course, that always depends on the vaccine allocations that we receive,” Reynolds said.

State officials say both doses of the Pfizer and Moderna vaccines have been given to all nursing home residents and employees who wanted it. The roughly 25,000 doses of those two vaccines the state had been receiving each week for that purpose will now be made available to eligible Iowans through Walgreens and CVS pharmacies in Iowa.