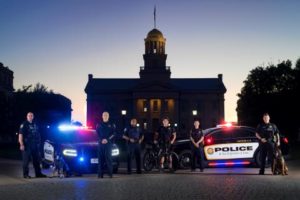 The University of Iowa is now accepting public comment on proposals to reimagine campus policing and safety.

A committee has drafted three potential models, some of which include moving away from the traditional role of police and diverting calls for service to other responders like health care providers.

Julia Zalenski, legal director of Prairielands Freedom Fund — a community bail and bond fund, is pushing for the model that would reduce the campus police force and reallocate funding to social services.

“A lot of these ideas are drastic, or feel drastic, just because we are not accustomed to imagining a world without the kind of policing that we have right now,” Zalenski says. “But once you start doing that, it’s right there, right? It’s for the taking. We can do it.”

The review stems from last year’s protests against systemic racism and police brutality, while critics say the UI Police Department has impacts far beyond the university. Zalenski points to UIPD officers’ role, along with other local law enforcement, in using tear gas against protesters last summer.

“The way that we approach policing in our community as a whole, even if we don’t feel it directly, has impact across a bunch of different spheres,” she says.

The deadline for members of the public to submit comments online is this Friday at 5 p.m.