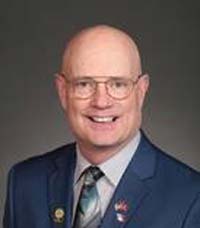 Republicans on a House committee have voted to set up financial consequences for social media companies that block or delete comments from Iowa elected officials or political candidates. Representative Steven Holt, a Republican from Denison, said censorship of conservative content is unacceptable.

“We do not need fact checkers to tell us what to believe. We don’t need elitists to decide what we can and cannot read,” he said. “We don’t need big tech giants censoring our words or deciding what we read.”

Holt said Facebook, Google and other social media platforms now constitute the public square where conflicts are resolved through discussion and debate.

“The only time this system catastrophically broke down, we had a civil war,” Holt said. “If the people’s voices are silenced and they feel their values and concerns are under attack, what is their recourse in the world we live in today? I believe that in silencing speech, tech companies are only adding to the volatility that is growing in our country.”

Under Holt’s plan, tech companies blocking or tagging posts from Iowa politicians would lose state tax incentives. However, if the content is restored, the incentives for the company would be restored. Representative Mary Wolfe, a Democrat from Clinton, warned of extensive litigation if this bill becomes law.

“We’re talking about sometimes millions of dollars in tax credits that these companies could lose,” Wolfe said. “I think there would be due process rights that they have.”

Republicans in the Senate are pursuing an even broader plan that would rescind hundreds of millions in state and local tax breaks and incentives already awarded to tech companies. Holt suggested that would create a regulatory burden and great expense for state government to police all complaints of censorship on social media.