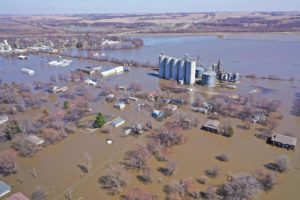 Iowa was inundated by record or near-record flooding in 2019, followed by severe-to-extreme drought in 2020, drought that’s endured into 2021.

What will this spring hold, as planting season is mere weeks away? Nathan Young is associate director of the Iowa Flood Center, based at the University of Iowa.

“The likelihood of flooding is normal for this time of year, for the most part,” Young says. “It’s slightly elevated in some parts of the state where we’ve got significant snowpack, like in southeastern Iowa. We’ve had a nice, gradual snow melt over the past couple of weeks so that risk is declining. All in all, I think it’s going to be a pretty typical year.”

It’s been a cold and snowy winter, with some parts of the state reporting snowfall just during February ten to 14 inches deeper than usual. Still, so far, there are no indications of major flood threats. The flood center has a network of about 300 sensors placed on bridges in dozens of waterways all across the state.

“They allow us to anticipate floods during the events as well as to understand the long-term history of water levels at that location,” Young says, “so we can make forecasts or estimate the long-term likelihood of flooding throughout the state.”

Those sensors measure river levels every 15 minutes and communicate data to the center’s Iowa Flood Information System platform. It’s a Google Maps-based web interface that visualizes real-time flood information for the entire state and is freely available to all — including the National Weather Service.

“The Weather Service, when they make their official flood forecasts, they use an ensemble of different predictions and ours is one of the ones they take into account,” Young says. “There are some rivers where they don’t make forecasts, especially some of the smaller rivers and in those locations, our information is the only information available.”

A wealth of information about the state’s waterways is accessible to anyone on the Iowa Flood Information System website.