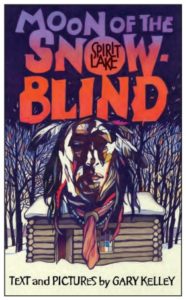 The Spirit Lake Massacre took place on this date in 1857 and the incident that left as many as 40 settlers dead is the subject of a graphic novel being released this week by an Iowa artist and writer.

Seventy-six-year-old Gary Kelley, of Cedar Falls, says the terrifying tale of the attack by a Dakota Sioux tribe on the northwest Iowa frontier village is one he’s heard told much of his life.

“Growing up in northwest Iowa and Algona most of the time, I was always addicted to the old western movies from back in the day but Native American history really was the big thing for me,” Kelley says. “I’ve got drawings of Indians from when I was a little kid going way back.”

While he’s created more than 30 books of art, Kelley says “Moon of the Snowblind” is his first graphic novel. During the raid, the band of Dakota Sioux took four women captive, the youngest of whom survived, and she wrote about the attack.

“My uncle who taught me how to draw had Abbie Gardner’s biography on his book shelf and I read it as soon as I was old enough to absorb it,” Kelley says. “I was fascinated by that story.”

The chief, Inkpaduta, led 14 braves in the raids in Spirit Lake and elsewhere as revenge for the murder of his brother and his brother’s family by a white settler, Henry Lott. There were other motivations, too, according to Kelley, who says he did extensive research for the graphic novel.

“The challenge that I wanted to really address is actually the words on the first page, ‘Two sides to every story,'” Kelley says. “In telling this story, I didn’t want to make it sound like the Sioux Indians, the Dakotas up there, were terrible people.”

By 1860, the population of Iowa had ballooned in just a decade from around 192,000 to 674,000, he says, and the Native Americans were being encroached upon at all sides. The massacre was a “dark moment” in Midwestern history, he says, that was incited by indigenous resistance to the loss of their homeland, culture and people.

The 184-page “Moon of the Snowblind” is being published by North Liberty-based Ice Cube Press.