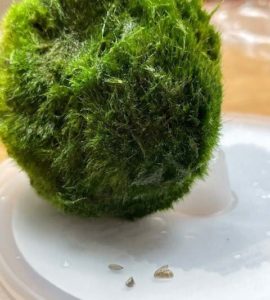 The Iowa Department of Natural Resources is warning aquarium owners a popular product they purchased could have the potential to spread an invasive species into state waterways.

DNR aquatic invasive species coordinator, Kim Bogenschutz says the product is used to absorb harmful nutrients in the water– but has been found to have invasive zebra mussels in them.

“The concern is that the people who have bought them for their aquariums and then decide they no longer the plants and fish and then dump them in a local waterway or down a storm drain and then they get into our lake and rivers,” she explains. “And that is certainly something we do not want to happen.”

They are called Marimo balls too and can be sold as the “Betta Buddy” product. They were first found in Washington state on March 3rd and have since been found in pet and aquarium stores in several states.

Bogenschutz says there are a couple of things you can do to kill the mussels before throwing them away. “Freeze them for a day, boil them for a minute. Or they can also disinfect them with chlorine and put them in a ziplock bag and throw them in the trash,” according to Bogenschutz. “If they have water in their aquariums, they should disinfect that as well. If they have a small amount they can boil it or disinfect it with chlorine.”

Bogenschutz says state and federal law enforcement have gone to all the chain stores and confiscated the product. Zebra mussels grow rapidly and choke out all other species. Bogenschutz has led the effort to get boaters to keep from spreading them.

“We’re doing really well. We don’t have them in too many locations, but there is always a potential for the spread between those water bodies too,” Bogenschutz says. “That’s why we need people to clean and drain and dry their equipment, the things you hear me talk about in the summer with your equipment, and now with the aquarium. This goes for goldfish or anything else that is in your aquariums…they never should be dumped out in ponds or lakes or rivers.”

Zebra mussels look like small, D-shaped clams that have alternating light and dark bands. Most are less than one inch long. Find more information about aquatic invasive species and how you can help prevent their spread in Iowa’s waters on the DNR’s website at www.iowadnr.gov.