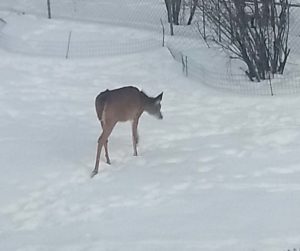 Senator Ken Rozenboom of Oskaloosa says the deer population is too large in some areas of the state and it’s time to change some of the state’s hunting regulations.

Rozenboom is sponsoring a bill that calls for a study of the economic and environmental impact of the state’s deer population. He expects the study would indicate the Department of Natural Resources deer management targets should be increased.

Jim Obradovich, a lobbyist for the Iowa Conservation Alliance, says the organization suggests changing who grants permits to hunters who have permission to hunt on specific properties.

“Moving it out of a central location here in Des Moines and then actually having the conservation officers who know their areas the best be the ones who are able to issue those permits,” Obradovich says. “We wouldn’t be breaking new ground with this, by any means. We have some neighboring states who do that.”

Rozenboom also wants to reduce the $1,500 civil fine for illegally taking a deer. He hasn’t settled on a figure yet and Eric Goranson, a lobbyist for Pheasants Forever and the Iowa Bow Hunters Association, warns if it’s too low, unscrupulous hunters will exploit it.

“It’d very easy to roll the dice and just start slaughtering deer, knowing that if you get caught every few years, it might be cheaper to do that,” Goranson says.

The bill cleared a Senate subcommittee this morning, but Rozenboom says major adjustments are in the works.