You are here: Home / News / Counties see cost of gravel for roads increasing 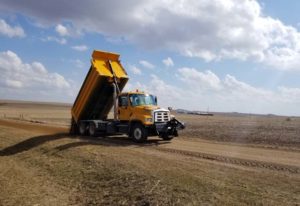 With spring arriving, that can mean the need to shore up county rural roads with more gravel.

Plymouth County Engineer Tom Rohe says that gravel is becoming difficult to locate, and in short supply, and consequently the price has risen sharply. Rohe says gravel is still the best option for those roads.

“I don’t know if there is another alternative. I know the crushed concrete supply is limited. There are a lot of people who use that material around yards and buildings and it is a pretty good product for a base material around there,” Rohe says. “To get the volume and the tons that we need on the roads, we are going to continue to try to find sources in the areas where we are currently getting the material.” He says gravel is found around rivers.

Rohe says a ton of gravel was going for around $4 dollars to $4.50 five years ago.
“And now we are about seven and seven-and-a-half — so we’ve gone up not quite double — but we’ve probably gone up more than the average inflation rate,” according to Rohe.

He says many times the transportation costs to haul the gravel is equal to the cost of the material. Plymouth County needs thousands of tons each year.

“Just kind of a ballpark number we always try to think we put on about a 140,000 ton a year. We have just a little over a thousand miles of gravel and we average 140 tons a mile — which is where we come up with that 140,000 ton,” Rohe explains.

Rohe says sometime in the future, counties may need to haul the gravel by rail, which would mean even higher costs for obtaining gravel for the county’s rural roads. He says the road looks in good enough shape this year that they probably won’t need more gravel than normal to get them back into shape.