You are here: Home / News / Bill would expand roster of those eligible to be Iowa substitute teachers 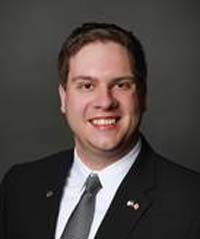 A bill that’s making its way through the legislature could expand the number of people eligible to serve as substitute teachers in Iowa.

It would let the Iowa Board of Education Examiners authorize people to be substitute teachers if the person has earned as associates degree or completed at least 60 credit hours as an undergraduate.

These authorized substitutes would be limited to 10 days per month, while licensed teachers who substitute have no such restriction.

Representative Garrett Gobble, a social studies teacher in Ankeny, said if this bill had been law when he was a student, he would have had the chance to substitute.

“This bill will allow the next generation of teachers to have the opportunity to experience the classroom and develop into the teacher they want to be in a real world experience,” Gobble said.

The bill would make permanent a provision in the governor’s public health emergency proclamation that was designed to help schools find substitute teachers during the pandemic. Margaret Buckton, a lobbyist of the Rural School Advocates of Iowa and the Urban Education Network, said because of the governor’s emergency order, schools were able to find substitutes who hadn’t considered teaching before, “so it was great to use that as not just fulfilling that need, but also recruiting new professionals to the classroom.”

Senator Tim Goodwin of Burlington is a former teacher, coach and school administrator in southeast Iowa who expressed support for the bill during an online hearing today.

“(The) teacher sub shortage has been around for quite some time and I can remember where it went from having to have teacher licensure to then a bachelor’s degree and now what’s being proposed now,” he said, “and so any way that we can help bridge that gap, I’m going to be in support of.”

The bill has no registered opposition. It cleared a Senate subcommittee earlier today and the full House approved it unanimously earlier this month.