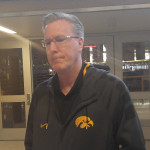 Iowa basketball coach Fran McCaffery has signed a four-year extension to his current contract. McCaffery is now signed through the 2027-28 season and his base salary remains unchanged for the next two seasons, however there is a longevity bonus at the end of the 2021-22 and 2022-23 seasons. His annual salary will increase each of the last five years.

“I am excited to announce the extension of Fran’s contract,” said Iowa athletic director Gary Barta. “He’s earned it. He’s built a strong foundation upon which we can continue to build for years to come. We originally planned to provide the extension at the end of last season, but paused due to the pandemic. I’ve appreciated Fran’s patience through it all.”

McCaffery has guided the nationally-ranked Hawkeyes to a 21-8 regular season record and a third-place finish in the Big Ten with a 14-6 league mark in 2020-21. Iowa has been ranked inside the Top 15 of the Associated Press Poll every week this season, including number eight in the final poll. He is Iowa’s second all-time winningest coach with 215 overall wins and 103 Big Ten victories.

“I am grateful to Gary Barta and President Bruce Harreld for their continued support,” said McCaffery. “It truly is an honor to represent the University of Iowa and coach the tremendous young men in our program. I am proud of what our team accomplished during the regular season, and we are eager to compete for a national championship this month.”

Second-seeded Iowa (21-8) will begin NCAA Tournament play on Saturday against No. 15 seed Grand Canyon (17-6). Tipoff is scheduled for approximately 5:25 p.m. (CT) at the Indiana Farmers Coliseum. The game will be televised nationally on TBS.