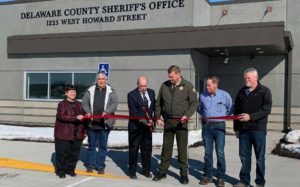 The new Delaware County Jail and Sheriff’s Office in Manchester will soon be fully operational after a recent ribbon-cutting ceremony.

The structure is situated beside the county courthouse and replaces a facility that was built in 1967. County Supervisor Jeff Madlom says the aging jail and sheriff’s office hadn’t met their needs for some time, nor did it meet state requirements.

“Our state jail inspector has told us for a number of years that we are out of compliance and we’re either going to have to come up with a new facility or he will shut down the jail,” Madlom says. “The third time we had a bond issue, it passed.”
The county’s voters approved the $5.9 million bond for the new jail in May of 2019, though the project did go over budget.

“We’ve had extra money set aside,” Madlom says. “It’s probably going to run about 6.5 or 6.6 total when we get it all done. We won’t be asking for any more money from the public and we will be fine.”

The former jail could only house 12 inmates, while the new facility has 40 beds, with both maximum and minimum security cells. The sheriff’s office has several significant improvements, too.

“The deputies did almost all of their work in the car and there was one computer in the jail that they all had to share,” Madlom says. “Now, we have a squad room where four deputies can be there at a time, there’s four desks and they can sit down and do their paperwork and catch up. It is just so functional now.”

The new facility features a kitchen to prepare inmates’ meals, secure and temperature-controlled space for items collected as evidence, secure entrances and a bulletproof window in the front lobby. There’s also a tornado safe room where emergency management officials can meet for weather emergencies.