You are here: Home / Politics / Govt / Senator Ernst: excitement of federal stimulus checks will wear off with tax hikes 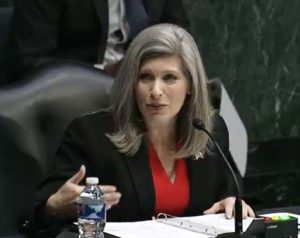 Iowa Senator Joni Ernst says the economic stimulus package will be a campaign issue for Republicans in 2022 even though it means many people are getting checks.

Ernst says there are many people who think the relief should have been more targeted. “They come to me. I heard even over the weekend when I was out doing county tours folks saying ‘you know I really don’t need this $1,400 payment, what do I do with it?,” Ernst says. “So you do have people who have been working and they don’t understand, why I’m getting a payment.”

Ernst says the euphoria of getting the checks will eventually wear off when people realize the long-term cost. “At some point in the future, very near future, we do expect that the Democrats to pay for all of this will end up raising taxes — and that will be extremely unpopular — for all the goodies that were handed out in this package,” according to Ernst.

She says she’s also heard from government leaders who don’t like the bailouts in the bill for poorly run states and cities. “That have said, hey we had to tighten belts during COVID, we did the right thing, we balanced our city’s budget, and now our taxpayers’ dollars are going to go to the city of Chicago or the state of Illinois,” Ernst says.

Ernst says the enthusiasm seen as the payments start arriving this week will subside when people realize the real cost of the bill. “When all of that other stuff comes to light — that’s when it becomes extremely unpopular. And we have seen this in previous administrations too, if you go back to times when previous economic stimulus plans were used,” Ernst says.

The relief bill was pushed through by Democrats without any votes from Republicans.