You are here: Home / News / Storms bring snow back as spring approaches 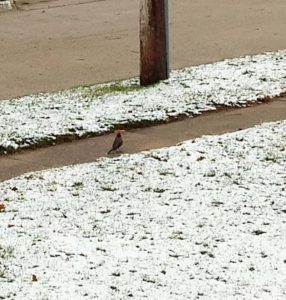 A robin in new snow in central Iowa.

Wide sections of Iowa’s northern half are seeing heavy snowfall this morning while it’s mostly rain mixed with a few flurries in central and southern Iowa.

Meteorologist Brooke Hagenhoff, at the National Weather Service in Johnston, says the late winter snowstorm is causing travel slowdowns and school closures in some areas, especially as you approach the Minnesota border.

“The most we’ve seen has been, as expected, across the far north,” Hagenhoff says. “We’ve got a report of five inches in Algona and some other areas there, Swea City, Iowa Falls. It’s really not as much as forecast. We had quite a bit of rain that fell before it so it slowed down the transition.” 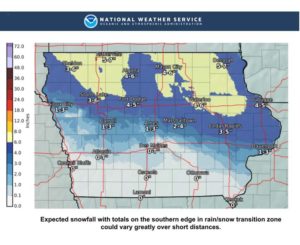 Another storm system is approaching which forecasters say may arrive as soon as tomorrow night, lasting much of Wednesday and possibly into Thursday.

“It’s another one of those mostly rain but could be a little bit of snow-type systems here as we get into early spring,” Hagenhoff says. “Totals on that are not as certain. We’re still fine-tuning where that rain and snow transition will be, but it’s safe to say there will be widespread rain with maybe some snow mixed in for parts of northern Iowa again.”

Hagenhoff says spring-like temperatures are expected soon that should melt off this snow and any more that may fall.

“We’re looking at highs throughout the week in the 40s,” she says, “and by the very end of the week, maybe some 50s and could touch 60 by the end of next weekend.” Spring arrives Saturday.