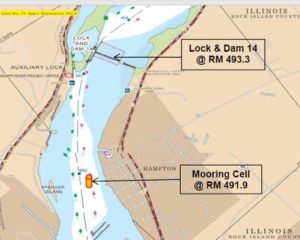 DOT map of the mooring site.

The Iowa Transportation Commission recently approved $2 million for a new parking spot for barges on the Mississippi River in the Quad Cities.

DOT planner, Stuart Anderson, says it’s called a mooring cell. “It goes in the river in advance of a lock and dam and it provides the ability for a barge to tie up to that pier while they are waiting for the barge ahead of them to go through the lock and dam,” Anderson explains. 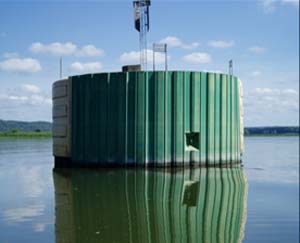 A mooring under construction. (DOT photo)

Anderson says it can help make smoother transitions for barges. “Often what happens is barges are waiting for barges ahead of them to go through the lock and dam system. They often have to either idle in the middle of the channel miles down river — or sometimes they will actually drive the front end of the barge up on the shore,” according to Anderson.

He says this can waste fuel for the barges or cause some environmental concerns when the barges go onto the shore.

“This mooring cell allows them to actually tie up to a pier much closer to the lock, so they can burn less fuel, be closer to the lock when they are ready to go. And certainly helps reduce any environmental impact of having to dock along the shore,” he says.

The mooring cell is proposed for Lock and Dam 14 downriver from LeClaire. While people think of Iowa as a land-locked state — the waterway is a key part of the state’s economy. “The Mississippi River is vitally important to the transportation of a lot of ag products to the export market,” Anderson says, “and so as an agency, we’ve been pretty focused on the Mississippi River and the lock and dam system over the last decade, and really trying to elevate the recognition of the importance of having a well-funded and maintained lock and dam system.”

Anderson says they hope this state investment will spur more federal investment in the lock and dam system as well. He says the construction of the mooring cell likely won’t happen until next year.