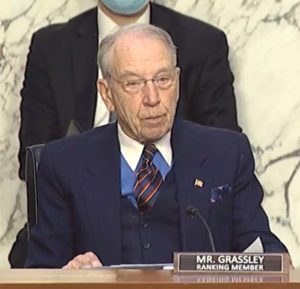 “I’ve found similarities between that and what Branstad got in 2013 that half the people said he shouldn’t run for re-election. He won by 20 points,” Grassley says. “I don’t fear any poll like that.”

The Republican from New Hartford says he hasn’t yet made a decision about running again and says he won’t make the announcement until this fall.

“In the meantime, I’ve got a responsibility to continue working hard for Iowans and I hope I do work hard by getting to the office at 6 in the morning and being around Capitol Hill until about 6 or 6:30 in the afternoon,” Grassley says, “and I enjoy my work.”

Grassley says he’s in no rush to retire. “I plan to make my announcement in September, October, November,” Grassley says. “A year is long enough to campaign so I’m just going to proceed and ignore polls that I find favorable — and unfavorable.”

Should Grassley run for re-election and serve another six-year term, he’d be 95 upon its completion.